Does Political Unrest, Like What Happened This Weekend In Saudi Arabia, Impact Fuel Prices? 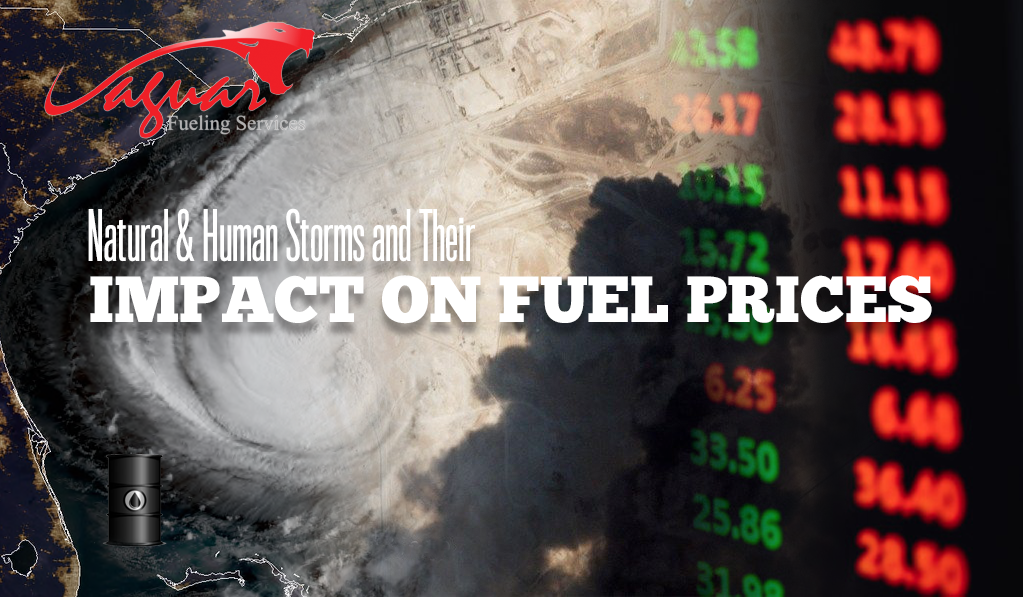 With the recent turmoil in the Middle East following attacks on the Aramco oil facilities, spokesman for the Saudi-led coalition in Yemen argue there is evidence that Iran is behind the weapons used for the attacks.

President Trump, in recent Tweets, suggests that a recent attack and downing of a U.S. drone and most recently the attack in Saudi Arabia have a common thread; denial by Iran and failure to accept responsibility.

Secretary of State, Mike Pomeo said in his Twitter feed: 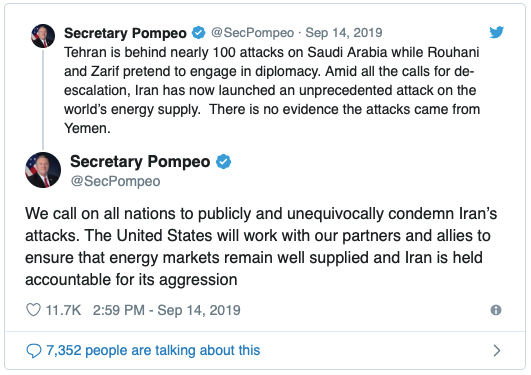 While traditionally the U.S. has relied on Middle Eastern oil, the U.S. Energy Information Administration states that the net imports from foreign countries average about 2.34 million barrels per day, the lowest rate since 1957. Since 2018 the U.S. has shifted to net exports in an unprecedented boom in American oil production currently ahead of both Russia and Saudi Arabia for oil exports. . Recent remarks from Trump indicated that the United States is no longer reliant upon foreign sources. In a tweet on Monday, Trump says: 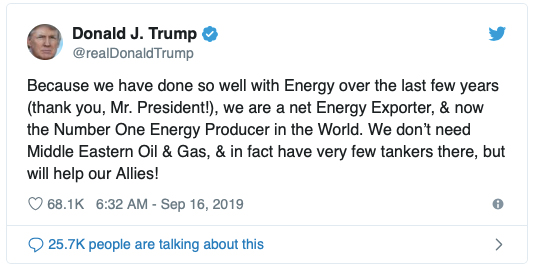 It has been reported that oil prices rose approximately 10 percent on Monday as investors reacted to the weekend attack; however, experts suggest that the impact of the Saudi attack would not likely impact the global economy.

Even President Trump suggested that there was an option to release strategic reserves which could very well calm the market if the markets change significantly. Since the weekend attack and yesterdays spike in price, the markets have moved once again, and the oil prices dropped suddenly by approximately 5 percent. Reuters notes that Saudi is now close to restoring 70% of the production lost due to the attacks.

The question for most Jaguar Fueling Service customers is whether or not this will impact fuel costs. As with any other event, whether it be a natural disaster or man-caused events such as terrorism or war, the price of fuel can and does fluctuate. Since oil is a commodity, and as such, it sees more fluctuations in price than more stable investments such as stocks and bonds, the laws of supply-and-demand ultimately drive fuel prices. The biggest problem is the disruption of production. Lack of production does not seem to be a concern for the United States who is becoming more and more independent of foreign oil. With the excess supply of oil, we find a drop in price. Even natural disasters have limited impact on fuel pricing. In 2005, for example, Hurricane Katrina affected 19 percent of the U.S. oil supply; this event only raised the cost to $3 more per barrel. With Harvey in 2017, gasoline prices increased but then soon leveled off in the weeks and months after the storm (albeit slower than we would like to have seen). While we may see an initial increase in fuel costs as the result of natural disaster or political unrest, it is the general perception of most experts this too will pass.