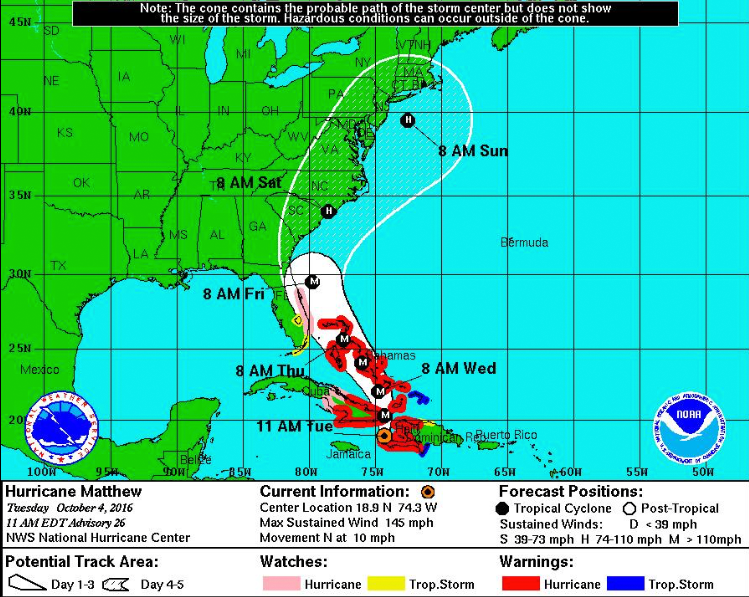 With Hurricane Matthew expected to hit the southeast portion of North Carolina officials have begun their preparations for the possible impact of Hurricane Mathew. According to the National Hurricane Center, the path of the hurricane could bring the storm through the coastal North Carolina causing heavy rains and high winds reaching 75 miles per hour or greater.

According to Mike Barton, Director at the Joint Public Affairs Office at Cherry Point:

“When severe weather approaches, the destructive weather conditions advance through the progressive TCCs, triggering preparation actions based on the anticipated schedule of the storm,”

In light of the trajectory of the storm city employees have activated their emergency preparedness protocols and are making every effort to ensure that employees of the city of Havelock are fueling city vehicles and emergency power generators. Homeowners are also being urged to secure their homes for the storm by securing objects around their property that could become projectiles in the high winds. In addition, residents have been asked to clear storm drain gutters of any debris that might occlude the openings and prevent them from doing their job in the midst of heavy rains.

As it stands, Hurricane Matthew has already made landfall in Haiti with winds as high as 145 miles per hour. The center of the storm is predicted to move westward with Florida now in its path. All models indicate that the storm will weaken slightly by the time it reaches the North Carolina coast but is still expected to maintain sustained winds at about 100 miles per hour. The storm is likely to continue its path, reaching the Carolina’s at some point on Saturday before it is expected to dissipate altogether.

For municipalities and businesses in Florida and North Carolina, Jaguar Fueling Services has been hoping for the best and preparing for the worst all season long. With the number of storms anticipated, we have ramped up our own readiness to provide our clients with the level of service that our customers have come to expect. Many of our clients have emergency fuel preparations made long before the events that unfold and we are committed to serving them with priority fuel delivery. If you have found yourself or your business on the back end of preparation we can still help. Give Jaguar Fueling Service a call today and we will make every effort to fulfill your specific fueling delivery needs.